The song by Jeff Beck, ‘Hi ho, Silver Lining’ merits some analysis but there are a couple of key lines in it:

“Anything you want is yours now, only nothing’s for free”

The song always reminds me of travelling in the back of a Royal Signals Land Rover along that North African coast road which was the focus of the Desert War.

As a very young Officer Cadet I was attached to the UK troops in Libya at the time, based in Benghazi, and we were off to check up on an oil installation in the Libyan desert operated by Esso.

It was an interesting and educational trip of which I still have some mementos.

Oh yes, the song, well I was tuned in to the BBC World Service on the radio, a big valve operated thing which required me to continuously adjust the tuning. This was the song that was coming through and we were all singing along as we drove with the Mediterranean on our right and the desert on the left under a clear blue sky.

I had plenty of time to think and observe while I was in the desert for those few days; my services as radio operator weren’t required much as the Americans had their own civilian installation.

Now; you and I know that if we set a clear intention we can be, do and have anything we wish for. There is no limit on what we can achieve.

As the song says, ‘nothing’s for free’.

This is where ‘The Secret’, although a great book and movie that awakened many people, didn’t really cover the bases. The Law of Attraction was put forward as the secret answer to everything – all you had to do was ask.

Well, yes, but it didn’t point out the critical importance of clarity, and it didn’t really talk about action.

Besides which you and I know by now that the Law of Attraction doesn’t work.

Not by itself anyway, as there are 10 other Universal Laws that go with it and there are two other elements to the equation which is where ‘nothing’s for free’ comes in.

It’s the ABC of working with the Law.

It’s no good just visualising, wishing and asking, you and I have to take action and we have to believe.

In reality, the belief usually needs to come before the action because otherwise the action quite often doesn’t get taken, nothing is done – it’s no coincidence that the word ‘attraction’ includes ‘action’.

Action is fundamental if your desire or wish is to be fulfilled.

I’ve written about belief before but the one element that I will repeat is that to ‘believe’ something, or to have faith in something, you don’t need to know ‘how’ it works, ‘how’ it’s going to come about, or even ‘how’ to take the necessary action.

All that follows – once belief is in place the ‘what to do and how to do it’ just reveals itself.

On the way back from Esso Zelten, after travelling through the sand dunes we visited a petrified forest. I still have a small piece of that wood turned to stone which was lying around everywhere in the sand.

It brought something home to me,

There’s oil below and the remains of trees on the surface. Once there was a forest here and all the life that went with it, nothing is ‘permanent’.

Nothing is permanent for you and me either – we can change ourselves and we can make changes around us so we must be bold, believe in who we are, clarify our intention and take action.

Believe in your Self, take the actions you need and your ‘silver lining’ will appear – like magic! 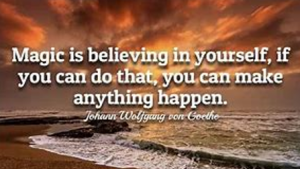